On September 6, the US Patent & Trademark Office published Apple's patent application titled Remote controller and FM reception arrangement.  Apple's patent generally relates to remote communication devices such as multimedia players, cell phones, radios (either mobile or stationary) and personal digital assistants. More specifically, the invention describes a user configurable modular communications system. Apple's first patent on this subject was published just days prior to Steve Jobs introduction of the iPod Radio Remote back in January 2006. Today's patent may or may not shed more light on the subject.

A modular communication system that includes a battery operated portable multimedia player is used to remotely control a accessory unit arranged to provide an output audio stream to an audio output device such as a headphone, earphone, etc. At a user's discretion, the multimedia player can also be used to provide the original audio source material that is, in turn, processed by the accessory unit for output to the audio output device or an accessory unit can be used to provide the audio source material from, for example, a radio tuner incorporated therein. 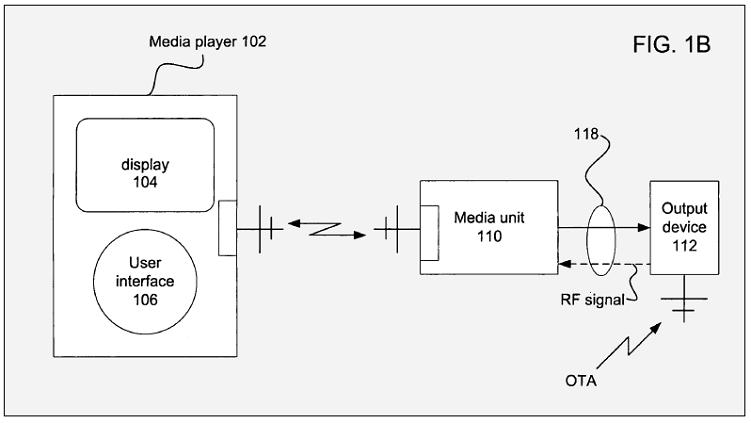 In the described embodiment, the accessory unit includes a controller unit, an audio amplifier unit, and an RF tuner unit. In the case where the portable multimedia player acts as the original audio source, the RF tuner is powered down in order to preserve battery power, otherwise, the RF tuner is powered up and configured to process any number of available radio broadcast formats. In a particularly useful embodiment, the audio output device includes an antenna used to receive radio signals that are, in turn, processed by the RF tuner unit.

The RF tuner included in the accessory unit is compatible with a number of both digital and analog radio broadcast formats (FM, AM, RDS/RBDS). It should be noted that the Radio (Broadcast) Data System (RDS)/RBDS) is a broadcast format that sends extra information along with VHF/FM radio services suitable receiving equipment without affecting the normal audio program. The basic concept behind RDS is that each FM radio station is given a set bandwidth can be used for its broadcasting. However, most stations do not use all of their bandwidth, and the spare bandwidth is usually wasted. Therefore, RDS uses this wasted bandwidth for transmitting a low bit rate FM radio based data signal by being modulated into the radio station signal and transmitted along side it. This arrangement is very cost effective since the existing transmitting towers can be used with very little modification. In this way, when configured to receive and process RDS/RBDS radio broadcast signals, data can be transferred from the RF tuner to the multimedia player for, if desired, display on a display screen.

The invention described herein pertains to a method, apparatus, and system that affords a user of a personal portable communication device, such as a multimedia player (along the lines of an iPod multimedia player manufactured by Apple Computer Corporation of Cupertino, Calif.) the ability to either remotely control (either wired or wirelessly) a compatible accessory unit (such as, for example, a Radio Data System (RDS) enabled radio) or to act as a source of audio source material (such as digital audio files stored therein). As a control unit, the multimedia player provides a number of control signals to the accessory unit that include, for example, a volume control signal, an RF tuner control signal (for selecting a particular radio broadcast format, station, etc.) and a mode control signal (for powering up or down the RF tuner unit, for example). In those situations when the RF tuner is powered up and configured to receive RDS/RBDS radio broadcasts, the accessory unit (when configured as an RDS enabled radio is often referred to as a "smart radio") receives media data (i.e., songs, music, etc.) and its related information (e.g., song title, title artist, etc) using Radio Data Service (RDS) based data bitstream. This data is communicated back to the multimedia player for display to the user. In this way, the user can (in addition to selecting a particular song or music selection) be provided with information (such as artist) directly related to a particular musical selection. For example, a user can use the available music data to select only certain artists, or only music having certain titles, etc. thereby greatly enhancing the user's listening experience. When the multimedia player is configured to perform as a provider of source material, the RF tuner is powered down in order to preserve battery power and a user can select any of a number of digital multimedia files (such as music, song, or even images or video), which is then processed by the multimedia player for output by the accessory unit to the external audio device. 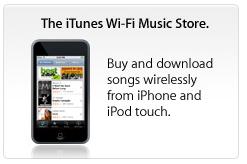 In context with yesterday's announcements, all you have to do is go back to May 2006 and read about the Wi-Fi Music Store in a patent report titled Apple files patent for wireless iPod with ringtones, micro browser. While we weren't privy to Apple's market branding at the time, we were able to see into the future. So when it all unfolded yesterday, it was nice to know that Apple delivered on a patent within fifteen months. Well done Apple – well done.