Will Apple Open a Store in Second Life?

On April 17, 2008, the US Patent & Trademark Office published Apple's patent application titled "Enhancing Online Shopping Atmosphere." Apple's patent generally relates to improving the experiences that online-shoppers may have at an online Apple Store, sometime in the future. While Apple points to the obvious advantages of shopping online, such as being continuously open for business 24/7, allowing consumers to quickly use search functions to find multiple items and of course the best of all, never having to leave the house to shop. However, Apple acknowledges that they have a long way to go before delivering a more interactive experience that could match that found in the real world. Apple's patent points out that "one drawback of online shopping is that the experience can feel sterile and isolating. Customers in such an environment may be less likely to have positive feelings about the online shopping experience, may be less inclined to engage in the online equivalent of window shopping (e.g., will not linger in front of a display), and may ultimately spend less money than their counterparts who shop in physical stores." 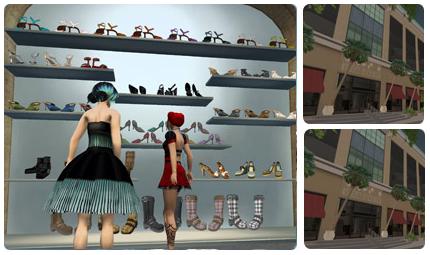 One of the newest crazes on the net in the past few years has revolved around Second Life, a 3-D virtual world created by its Residents. Since opening to the public in 2003, Second Life has grown explosively and today is inhabited by millions of Residents from around the globe. In 2007, CNN joined Second Life and Susan Grant, executive vice president of CNN News Services stated at that time that "The thing we most hope to gain by having a CNN presence in Second Life is to learn about virtual worlds and understand what news is most interesting and valuable to their residents."  Even the television show CSI: NY introduced Second Life into one of their 2007 episodes and has an ongoing Virtual site to explore. The funny thing about this is that Second Life actually provides a rudimentary yet viable "Marketplace." Yes, you can start a virtual store by buying a virtual property and even paying virtual taxes (a user fee of course). The illustration above presents a Store Front, on the right, and a view of the shoe store once you've virtually walked in, on the left. 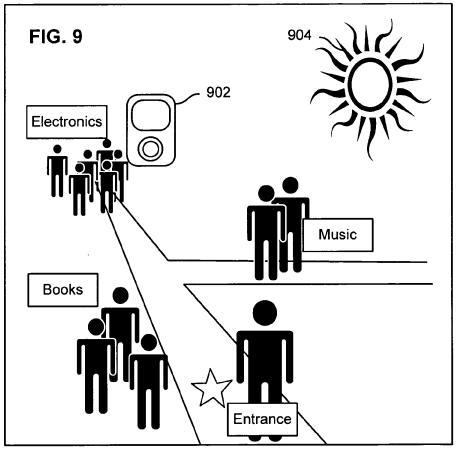 So what does any of this have to do with Apple? Simply put, one of Apple's latest patents presents us with a number of clues that indeed indicate that they're creating some kind of a virtual world environment in their labs at this very moment. Note here in their patent FIG. 9 where they're clearly presenting the notion of it being "sunny."  Although that may sound strange, Apple's patent goes on to clarify that by stating that "environmental/atmospheric indicators are also included. Alice is visiting the Acme website at noon. Accordingly, a sun (904) is included in region 112. If Alice were to return later in the day, a moon or star icon might be shown instead of sun 904. Other indicators, such as different color schemes during the fall season or winter holidays can also be included." Hmm, that would clearly indicate that there's a store front involved here in order for a user to know that it's a sunny day in the fall in this virtual world. Something a little outside of the box I'd say and definitely far beyond anything known by any of us shopping at the Apple Store today.

As shown in the Second Life graphic above, you clearly see what are known as avatars. Apple's patent speaks to that point specifically by stating that "visitors are represented by avatars selected by those visitors, rather than a more generic or uniform icon." But the patent goes far beyond that to stating that "representations of visitors include an indication of the sophistication of that visitor." For example, if a user has an "N" superimposed upon him (as an avatar), then this indicates that he is a new user or "newbie." If a user has an "E" superimposed on them, then if means that they're an "expert." Similarly, a salesperson that could offer help would be seen as an avatar with an "H" on their chest.

In some embodiments, visitors (and employees such as site technical support or customer service representatives) would have clearly marked "nametags" that would specifically indicate the type of expertise that they possess. For example, visitors may be encouraged to "ask me about jazz music" or "ask me about photo software." Particular types of users can be shown or hidden so that Alice can request to see, e.g., experts currently in software if she needs a recommendation, or newbies currently in software if Alice is interested in offering her advice to them (e.g., if she notices that they are spending a long period of time on a particular page--perhaps unsure of what to buy).

Actually that's an interesting line of thinking that could be of benefit for many of us. If indeed Apple employees are working the virtual stores, I'd say it's an idea whose time has come. But something tells me that Apple will be looking for an army of volunteers to participate in the program and then it becomes a little more of a social interaction: Something that once again mimics Second Life.

Caution: A Work in Progress

Some of what the patent suggests seems a little too weird - even for me. Like this example of Follow the Footsteps - that reads as follows:

"Information shown in [certain] regions can also be used in conjunction with contests or other promotions. For example, Alice might be instructed to "follow the footsteps" of other visitors (visit the page that viewers of page 400 subsequently visited) to receive a discount. 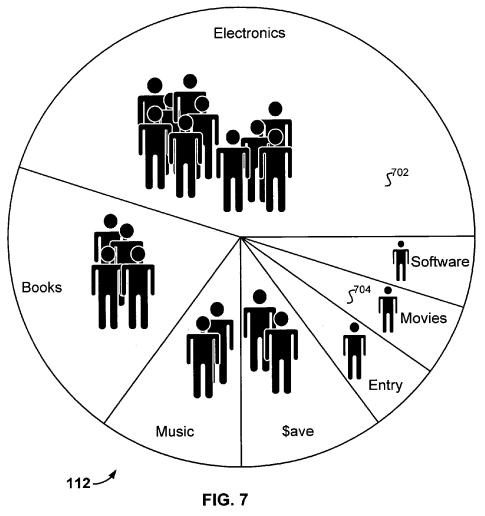 Alice can also interact with [a particular site] region such as by right clicking on one of the visitor icons and selecting an option to "go where that visitor is going" or "see where they're going" (without being taken there). Alice can also pose questions to particular users and ask why they left the previous page, why they went to the current page, etc. and might learn, for example, that a new product was just announced."

Say what? I don't think that I'll be asking anyone why they left a previous page anytime soon or in the future or in this lifetime for that matter. Some concepts are just a bit too out there. In Figure 7 above, Apple will provide users the ability to mouse over a store chart so that online shoppers could see who's online buying what at that very moment. And pray tell - why do I want to know that? Okay, so it's a work in progress: I get it – let's move on.

In the big picture, the question of the day is rather simple. Do you think that Apple could be preparing to launch a virtual Apple Store on Second Life - or is Apple working on re-introducing eWorld - Part Deux? 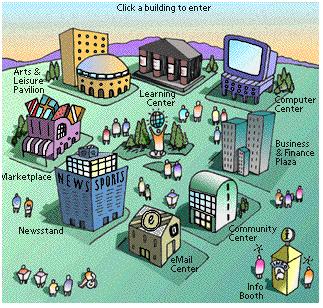 According to Wikipedia, eWorld was a short-lived online service launched by Apple Computer in June 1994. The services included email (eMail Center), news, and a bulletin board system (Community Center). Users of eWorld were often referred to as "ePeople." eWorld was considered too expensive, was marketed infrequently, and consequently failed to attract a high number of subscribers. The service was only available on the Apple Macintosh, despite promises that it would be available to Windows users by 1995.

Today, Apple has provided tens of millions of Window users with access to their iTunes/iTunes Store software and their Safari web browser for the PC and iPhones. So will Apple try to open an online Virtual Store on the Second Life platform in order to reach out to more Window users?  No. Why? Well, for starters, unless Second Life gave Apple the keys to their virtual city, Apple's Steve Jobs doesn't exactly play well with others - to say it mildly. So if there's to be a new virtual world that contains an Apple Store, it'll likely be one owned and controlled by Apple – period.

Yet the good news is, if you consider virtual worlds an interesting advancement, Apple's new patent concepts covering avatars and atmospheric/environmental factors definitely points to a non-traditional Apple Store being seriously considered in Apple's war room.

The Los Angeles Times recently reported on April 4 that "Apple Inc. has surpassed Wal-Mart to become America's No. 1 music store, the first time that a seller of digital downloads has ever beaten the big CD retailers." Yes, that would be the brick and mortar Wal-Mart – thank you very much. So it stands to reason that Apple can't sit around while traditional retailers plan their come-back. Apple has to use their UI acumen and expertise to keep their online stores on the cutting edge. This week's patent clearly illustrates that Apple is toying with new online retail directions and concepts.

As long as Apple's virtual stores don't end up being too "cartoony," like eWorld was - I think Apple could be on the right track here. When I play top video games like BioShock, Call of Duty 4 or any modern 3D video game, I wonder to myself as to why an online store couldn't provide me with that level of retail experience; An experience that would allow me as a character to walk around in their virtual store and let me interact with it in a very sophisticated 3D manner. Just don't provide us with any weaponry, and we'll be just fine - Ha!

Anyways - Here's to hoping that Apple gets this one right.

Update: One of Apple's patents related to this concept has since received a granted patent.