The US Patent and Trademark Office officially published a series of four newly granted patents for Apple Inc. The notables within that group include one relating to a hybrid antenna that Apple prominently yet quietly assigns to that of smartbook. The second patent of interest is extraordinarily detailed and covers the widest range of future products imaginable. In fact this report will only cover one segment of the patent while the other information is presented in our supplementary report titled "Apple TV to Take Sporting Events to a Whole New Level." This powerful patent was acquired by Apple as the key credit goes to an individual by the name of Curtis A. Vock of Boulder, CO.  In fact, if truth be told, it would appear that Apple acquired this patent via the outcome of Civil Action Complaint 06-CV-02122 - PhatRat Technology LLC v. Apple Computer Inc. filed in Oct. 24, 2006. The patents known to be associated with PhatRat were "Personal Items Network, and Associated Methods" and "Activity monitoring systems and methods" covered in our March report. The technology found within this current patent covers subject matters ranging from the Apple iPhone 3G-S feature called "Find My iPhone," to that of a heart monitoring system, an advanced Industrial Transport tracking system, a baby monitoring alarm system and other unique applications that could very well be worked into future iterations of Apple's iPhone.  Curtis A. Vock is credited with over 45 successful patents including those from PhatRat. Apple's key patent graphic example is that of FIG. 21. It's a perspective view of an illustrative antenna having a directly fed slot antenna resonating element and an indirectly fed antenna resonating element in which an inductor is placed across the terminals of the antenna.  FIG. 1 is a perspective view of an illustrative handheld electronic device with antenna structures in accordance with an embodiment of the present invention. Figure 1 is that of the iPhone.

Apple's patent states in typical boilerplate fashion that "the foregoing is merely illustrative of the principles of this invention and various modifications can be made by those skilled in the art without departing from the scope and spirit of the invention." With that said, Apple covers every imaginable device on the planet including such things as a wrist-watch, pendant, earpiece, gaming device, GPS device, PDA, cell phone, media player etc.

Yet make no mistake about it: The initial product line listed for this patent under "detailed description" is that of the laptop and specifically "small portable computers of the type that are sometimes referred to as ultraportables."

Apple's patent generally relates to sensing systems monitoring applications in sports, shipping, training, medicine, fitness, wellness and industrial production. The invention specifically relates to sensing and reporting events associated with movement, environmental factors such as temperature, health functions, fitness effects, and changing conditions. The patent is divided into two distinct branches covering Movement Monitoring Devices and Event Monitoring Devices. In this particular patent, the basics of Apple's background are important to read in order to grasp the scope of what is covered by this patent.

Apple's Advances in technology have provided some quantification of movement. For example, GPS products now assist in determining the location of golf carts, vehicles and persons.

However, the detail of movement, minute to minute, second to second, is still not generally determinable in the prior art. For example, the movement of tangible objects typically involves (a) the shipment or carrying of goods and (b) electromechanical or motorized apparatus (e.g., planes, trains, automobiles, robots). The exact movements of such objects, and the conditions that they are subjected to, from point to point, are only qualitatively known. By way of example, a package is moved from location to location through delivery services like FEDERAL EXPRESS or UPS; however what occurred during transportation, and what transpired to the package, is anyone's guess. Occasionally, an object within the package is broken, indicating that the package experienced excessive abuse; but whose fault it is, or how or when it happened - are not known. What environments the package experienced is also not readily known.

The movement of persons, on the other hand, typically involves human-powered transportation, e.g., facilitated by biking, a wheelchair, or a motorized vehicle, e.g., a car. Body movement involved in transportation is subjected to many forces, some of which are dangerous. But the prior art does not provide for this knowledge; there is no effective way, currently, to efficiently quantify human movement. In sports, physical fitness, and training, precise information about movement would assist in many ways. By way of example, how effective a hand strike is in karate or boxing is, today, only qualitatively known. Quantitative feedback would be beneficial.

The patent first describes the technological make-up of a monitoring device which at one point describes port 16 as being that of a transponder that reflects event data to receiver 24. In one preferred embodiment, receiver 24 is part of the circuitry and packaging of a cell phone, which relays events (e.g., a movement event) to a remote storage facility. Think of that as being an essential component of Apple's new "Find My iPhone" service. 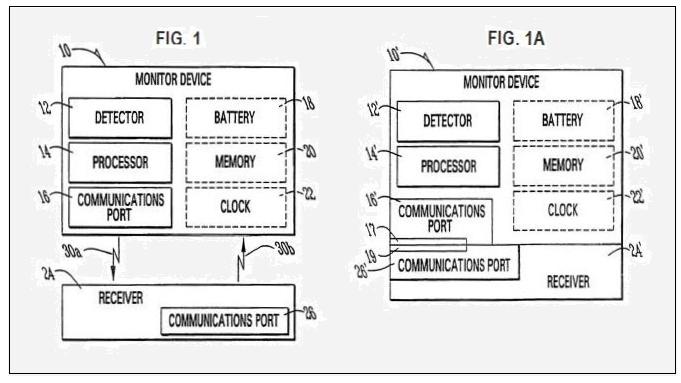 In other embodiments, receiver 24 is part of the circuitry and packaging of a MP3 player, pager, watch, or electronic PDA. Receiver 24 may connect with headphones (not shown) to provide information to a user and corresponding to "event" data.

A monitor device 10 preferably includes an adhesive strip that provides for convenient attachment of the device to an object or person. As shown in FIG. 2, one such device 10'' is shown coupled to adhesive strip 32 for just this purpose. Further, in one preferred embodiment, the detector 12 is also integrated within the ASIC as a solid-state accelerometer (e.g., using MEM technology). However, detector 12 can be a stand-alone element such as a piezoelectric strip, strain gauge, force-sensing resistor, weight sensor, temperature sensor, humidity sensor, chemical sensor, or heart rate detector.

Apple's patent covers an in-home baby monitoring alarm system that is applied to a child's foot as if it were a band aid, as shown in FIG. 57 below.  Once applied, the device synchronizes to baby body movement (such as repetitive movements associated with pulse or respiratory rate), breathing sounds or heart rate. The device then searches for "events" in the form of the absence of repetitive signals, indicating for example the danger of an absence of pulse, heart rate or respiration, in step 890. In step 892, the monitor device generates a wireless signal as a warning; that signal is received at a remote receiver at step 894. Once received, remote receiver generates an audible alarm (e.g., a buzzer sounds) or visible alarm (e.g., an LED is lit), in step 896.

As an alternative, the detector of the monitor device is a temperature (or alternatively a humidity) detector, and the alarm monitor merely tracks infant temperature for worried parents; such a device is useful for sick infants in particular. The temperature sensor can be coupled with other detectors (e.g., heart rate) to provide multiple functions, if desired.

The MMDs and EMDs of the invention thus have several other advantages. They may be used discretely and safely as medical diagnostic and monitoring detectors. With appropriate detectors, EMDs of the invention can for example provide for portable, wireless pulse oxymeters or blood glucose monitors. With the appropriate detectors in MMDs, rehabilitation clinicians would be able to quantitatively monitor metrics such as limb movement and balance. EMDs equipped with certain detectors may find use as real time, remote and inexpensive pH monitors and blood gas monitors.

Apple's patent introduces us to the electronic drink coaster. Do I laugh now or later? Then again, once refined, it could actually have some benefit to both consumer and service establishment. The overview design is noted below as FIG. 70.  The devices internal electronics sense the weight of a drink on the e-coaster (not the patent's term) to automatically inform a restaurant or bar attendant wirelessly that the customer needs a new drink or refill. In one embodiment, a customer can also place an order from this electronic coaster. If it's actually built into the table, then in might just work. Yet I don't really think this falls into any feature or product line that Apple will invest time in.

Apple's patent provides us with patent FIG. 72 which covers a package management system and sensor. The sensors could be integrated directly into the shipping labels so as to communicate such data as impact, temperature, humidity etc.

By way of example, if the detector is an accelerometer and the MMD is designed to monitor "impact" (e.g., acceleration events that are less than about 1/2 second)--and yet impact data is not considered interesting unless the MMD experiences an impact exceeding 50 g's--the preferred MMD used to accomplish this task would continuously monitor impact and tag only those impact events that exceed 50 g's. The "event" in this example is thus a "50 g event." Such a MMD is for example useful when attached to furniture, or a package, in monitoring shipments for rough treatment. The MMD might for example record a 50 g event associated with furniture shipped on Oct. 1, 2000, from a manufacturer in California, and delivered on Oct. 10, 2000 to a store in Massachusetts. If an event stored in MMD memory indicates that on Oct. 5, 2000, at 2:30 pm, the furniture was clearly dropped, responsibility for any damages can be assessed to the party responsible for the furniture at that time. Accuracy of the time tag information can be days, hours, minutes and even seconds, depending on desired resolution and other practicalities. 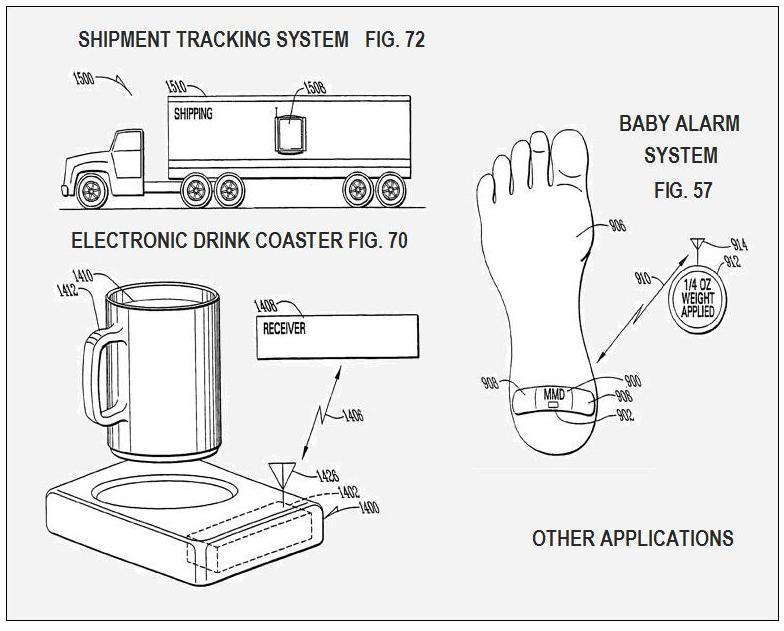 NOTICE: Patently Apple presents only a brief summary of patents with associated graphic(s) for journalistic news purposes as each such patent application and/or Issued Patent is revealed by the U.S. Patent & Trade Office. Readers are cautioned that the full text of any patent application and/or Issued Patent should be read in its entirety for further details. For additional information on any granted patent noted above, simply feed the individual patent number(s) into this search engine.